All additional spending under Emergency Ordinance will be gazetted, says Zafrul 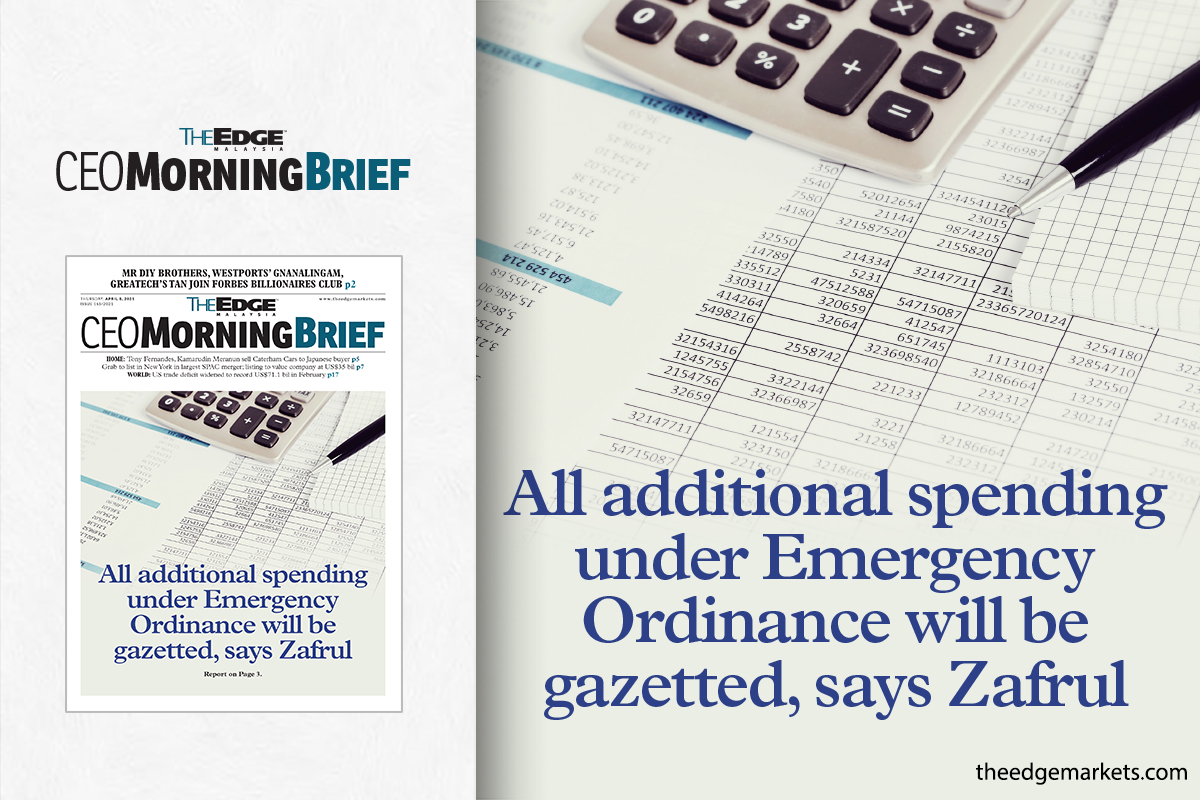 This shows that the government is being transparent and strives to ensure accountability and responsibility in implementing any expenditure, said Zafrul in defending the law which was introduced last week.

“Taking into account the need for additional allocations in the ever-changing circumstances and uncertainties of the Covid-19 crisis, the federal and state governments need the flexibility to approve additional spending to address the health crisis, and meet their urgent needs to address the direct impact of this pandemic on their respective economies,” the minister said in a statement.

Zafrul was referring to the temporary financial provision, which allows additional expenditure by Putrajaya and state governments with the respective approval of the federal treasury or the menteri besar or chief minister of a state.

Zafrul argued that the section relating to temporary financial provision in the Emergency Ordinance is “not a new provision”.

“Matters related to the presentation of the annual budget and supplementary estimates were also carried out during the Emergency period from 1969 to 1971,” he said.

“The governance guidelines will ensure that the additional allocation for the year is a necessary expenditure.

“The Ministry of Finance also takes into account the government’s fiscal position before any application is considered,” he said, referring to the statutory debt limit of 60% of GDP, and the cap on offshore borrowings and treasury bills at RM35 billion and RM10 billion respectively.

“Despite the enforcement of the ordinance, the debt limits are still subject to the respective statutory provisions for each type of debt,” added Zafrul.

The provision also included another amendment for proceeds from treasury bills and government investment issuance (GII) not to be restricted for development expenditure — meaning it can be used to fund operating expenditure during the Emergency.

Federal government revenue is expected to be at RM236.9 billion in 2021, as opposed to operating expenditure of RM236.54 billion, according to the Fiscal Outlook and Federal Government Revenue Estimates, published by the ministry.

“Overall, any additional expenditure incurred must comply with existing rules and legislation to ensure government discipline and adherence to procedures.

“This ordinance neither waives nor voids the statutory debt limit, or the Current Account Surplus requirement,” he added.

The gazette that was promulgated by the Yang di-Pertuan Agong on March 31 has raised concerns among think-tanks and the federal opposition who felt it was “unnecessary” to abandon the relevant constitutional provisions during the Emergency period, as there are already sufficient provisions that will allow the government to use parliamentary process even during urgent times.

IDEAS chief executive officer Tricia Yeoh, in a statement today, said since the King has decreed that Parliament could be in session during this time, the government should utilise this opportunity to seek parliamentary approval for financial policies and prove that it will handle this Covid-19 crisis with accountability.

The Emergency Ordinance was proclaimed by the King under Article 150 of the Federal Constitution on Jan 11, citing the existence of a grave emergency threatening the security, economic life and public order in the country due to Covid-19.

Prime Minister Tan Sri Muhyiddin Yassin has guided for the Emergency Ordinance to end by August, pending the King’s decision under the advice of an independent special committee, after which the 15th General Election is expected to be held.