My Say: Asia could face a sharp rise in protectionism 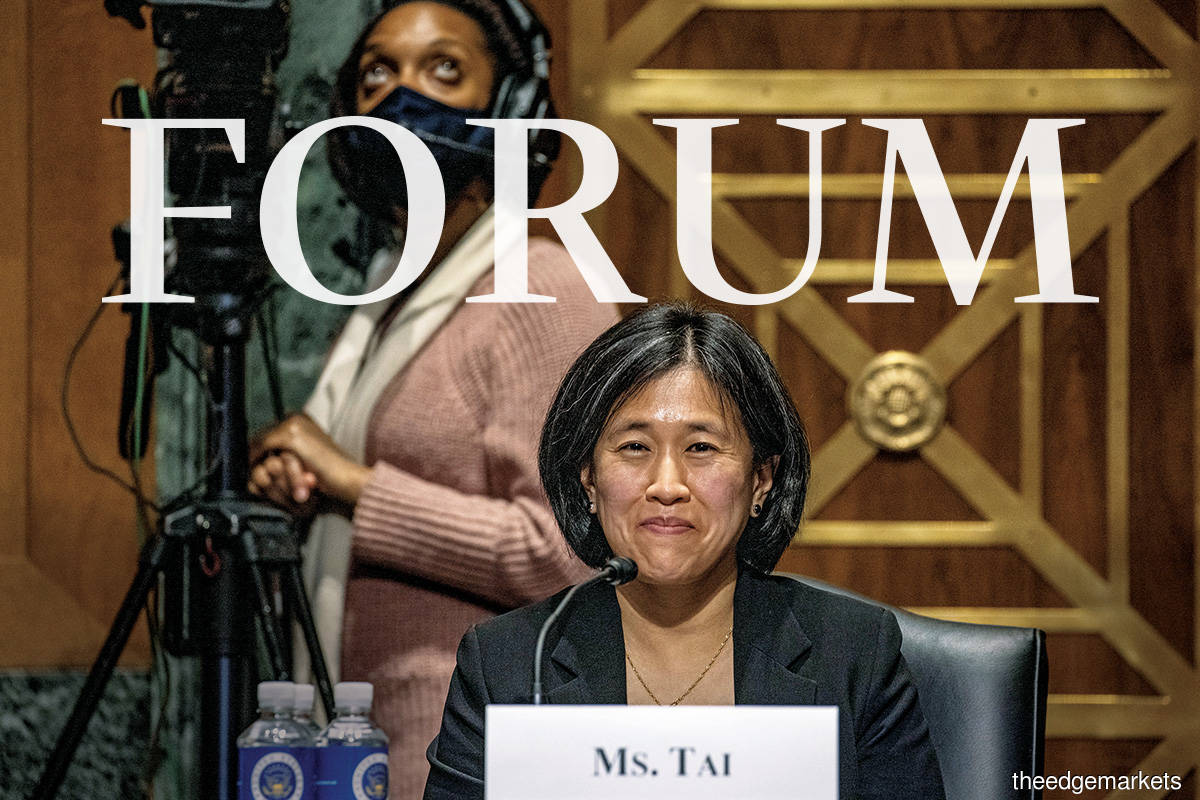 Trade Representative Katherine Tai has warned that the US could impose tariffs on goods from countries that proceed with their digital services taxes … Asian exporters, particularly those that run large external surpluses, should anticipate more pressure from trading partners, especially the US, in the coming year

As 2020 drew to a close, the World Trade Organization reported that the number of new trade restrictions being introduced by governments across the world had actually fallen compared with 2019. This was partly because the US-China trade deal agreed in January last year helped to ease US-China trade tensions, thereby bringing to an end the tit-for-tat series of trade measures each side had been imposing on the other in 2017 and 2018. In addition, the pandemic-induced collapse of world trade also meant that there was less trade to restrict as governments focused on containing the outbreak and not on their trade policies.

But we should not rush to celebrate this apparent easing of protectionist tendencies. Even while falling compared with 2019, 2020 still saw a pace of new restrictions that was substantially higher than in 2017. And as the global recession caused by the pandemic eases and world trade recovers, we fear another swing towards aggressive trade measures. We need to think about what is driving this, how Southeast Asia will fare and what the region can do to insulate itself from this malign trend.

The forces driving this protectionist bent in trade policies are quite powerful and will probably dominate any more benign forces.

First, across the world, whether it is in free market economies such as the US or mixed economies such as China or India, more disenchantment with free trade is precipitating a stronger tendency towards inward-looking trade policies. The past two decades of globalisation certainly unleashed higher growth, especially for economies such as that of China and facilitated a dramatic reduction in global poverty. However, the picture was more mixed in countries such as the US, where free trade was blamed, rightly or wrongly, for job losses and stagnant wages. In countries such as India, the feeling was that trade opening had failed to bring in the expected benefits but instead had disproportionately benefited trading partners such as China.

The Covid-19 pandemic aggravated this tendency. It turned out that production of critical items such as antibiotics and other pharmaceuticals as well as medical equipment such as personal protective equipment was overwhelmingly concentrated in just a few countries such as China. After supply chains came under strain because of the pandemic and supplies of these items proved difficult to source, governments decided that in the future, a higher share of such items would have to be produced domestically.

Growing geopolitical tensions deepened this resolve. Neither the US nor China can countenance a situation where vital components needed for military equipment such as specialised semiconductors are being produced in countries that may restrict exports during a political clash.

This shift in economic philosophy is evident in the Biden administration. While disavowing many of former US president Donald Trump’s policies, the new administration has retained many of the protectionist measures introduced by its predecessor. In its short time in office, President Joe Biden’s trade team has already imposed tariffs on aluminium exports from the UAE and fertilisers from Morocco, extended the Buy American rules for government procurement introduced by Trump and continued enforcing the Jones Act, which mandates that goods shipped within the US must be carried on American-owned ships. The new administration’s Interim National Security Strategic Guidance emphasised that economic security will be at the heart of its decisions on international engagement and trade. US Secretary of State Antony J Blinken has observed that the administration will make labour protection and job security a priority in its foreign policy.

A second driver of greater protectionism is now emerging — encouraged by the likely worsening of global imbalances. In particular, the US current account deficit is almost certain to expand sharply in the coming years, which would deepen American concerns about “fairness” in trade. Biden’s US$1.9 trillion (RM7.8 trillion) fiscal stimulus is already feeding through to rising demand in the US. That expansion in demand will be greatly extended if and when Biden’s planned US$3 trillion infrastructure and social spending bills are passed — something which administration officials are increasingly confident will happen.

No other major economy is contemplating stimulus anywhere near that scale. Moreover, America’s rollout of vaccines has been more efficient than those of the EU or Japan. All this means economic normalisation in the US will be so much faster than in its major trading partners — which also means the US economy will suck in huge amounts of imports from slower-growing trade partners.

A third reason for more trade frictions relates to possible clashes over policies on taxation or the environment. Recent news that the US was considering imposing tariffs on US$1.3 trillion worth of French goods in retaliation against France’s decision to impose a digital services tax came after US Trade Representative Katherine Tai warned that tariffs could be employed on goods from Austria, India, Italy, Spain, Turkey and the UK should they go ahead with their digital services taxes. The Biden administration has also indicated that it will step up on environmental rules to reduce its carbon footprint. But with that will come concerns that countries that are less rigorous about decarbonising their economy would gain an unfair advantage over those who did. That could spur trade measures as well.

Fourth, more countries are again using industrial policy, namely greater government intervention, to develop industries that are considered strategically important. There is growing acceptance within the US for more government involvement in boosting industrial capacity in strategic areas such as semiconductors, pharmaceuticals and medical equipment. Many national security strategists believe that industrial policy is a vital element in America’s response to the rising challenge from China, which liberally uses state intervention to further its strategic goals. In Europe, there is the European Green Deal, which will use industrial policies to promote “industrial sovereignty” while also transitioning to a greener and more digitalised economy. Governments, businesses and academia will be brought together to achieve this new economy.

There are also likely to be policies to induce companies to construct supply chains for key goods within the US. In late February, Biden ordered a government review of American supply chains with a view to reducing “overreliance” on external sources. Biden also revealed that he would be seeking an additional US$37 billion in funds to expand semiconductor manufacturing in the US — rather than rely on foreign, mainly Asian, sources.

What should Asian economies fear?

Consequently, Asian exporters, particularly those that run large external surpluses, should anticipate more pressure from trading partners, especially the US in the coming year.

First, as the American current account deficit deteriorates, there will be political pressure on the Biden administration to do something about it. Asia should expect more American complaints about “currency manipulation” as a start. The administration could use the next US Treasury foreign exchange report (due by mid-April) to issue a warning to countries that run persistent surpluses and whose foreign exchange reserves have been growing — many of them in Asia. It is even possible that the US Treasury may extend its accusation of currency manipulation to more countries, in addition to Vietnam and Switzerland, which were fingered in last December’s report.

Second, as the Biden administration’s fiscal stimulus feeds through to import demand, there may be large spikes in US imports of certain goods. The administration is likely to respond with more tariffs on such goods.

Third, the differences over digital taxation will take some time to resolve and, in the interim, it is possible that more countries will go ahead with the tax. That would bring further retaliation from the US in the form of tariffs and other countermeasures.

Fourth, as developed economies implement more environmental policies, talk of a border adjustment tax will return in both the US and in Europe. There was a flurry of speculation of such a tax in the early days of the Trump administration. This time, a border tax could be more real, though the practicalities of estimating the appropriate rate to equalise outcomes between countries moving vigorously on decarbonising versus others will be an obstacle and an invitation to using the environment as a cover for protecting local producers indiscriminately.

Asia needs to seek protection from protectionism.First, we could see more countries in the region trying to find strength in numbers through regional integration. The Asean Economic Community (AEC) has been in existence for five years now but does not seem to have had much impact, perhaps because there remain many non-tariff barriers that impede trade. A stronger sense of a common threat from protectionism could foster a keener sense of community and allow for the weaknesses in the AEC to be rectified. The same could be said for the Regional Comprehensive Economic Partnership agreement, which brings all 10 Asean countries into a trade agreement with China, Japan, South Korea, Australia and New Zealand. Similarly, we could see more countries inclined to join the Comprehensive and Progressive Trans-Pacific Partnership (CPTPP), which is seen as a high-standard free trade agreement because of its wider coverage of both tariff and non-tariff issues as well as of factors that could impede trade flows such as government procurement rules. It is no surprise that Thailand and South Korea, which initially stayed away from the CPTPP, are close to submitting applications to join it. Being part of these large trade networks could give the smaller exporting countries in Asia more bargaining power if confronted with aggressive trade measures by the large developed economies.

Second, proactive strategies could help moderate the urge for protectionism. In the 1970s and 1980s, Germany and Japan deflected American trade pressure on them by investing heavily in manufacturing production in the US. Similarly, Asian economies could now encourage their companies to establish some production in the developed countries. Indeed, we are already seeing this happening. For example, Samsung Electronics is reportedly planning a US$10 billion investment in advanced logic chip manufacturing in Austin, Texas. TSMC is committed to setting up a US$12 billion plant in Arizona as well.

In conclusion, like it or not, there will be a further increase in protectionist pressures on Asia. Our policymakers must be proactive in countering that threat.