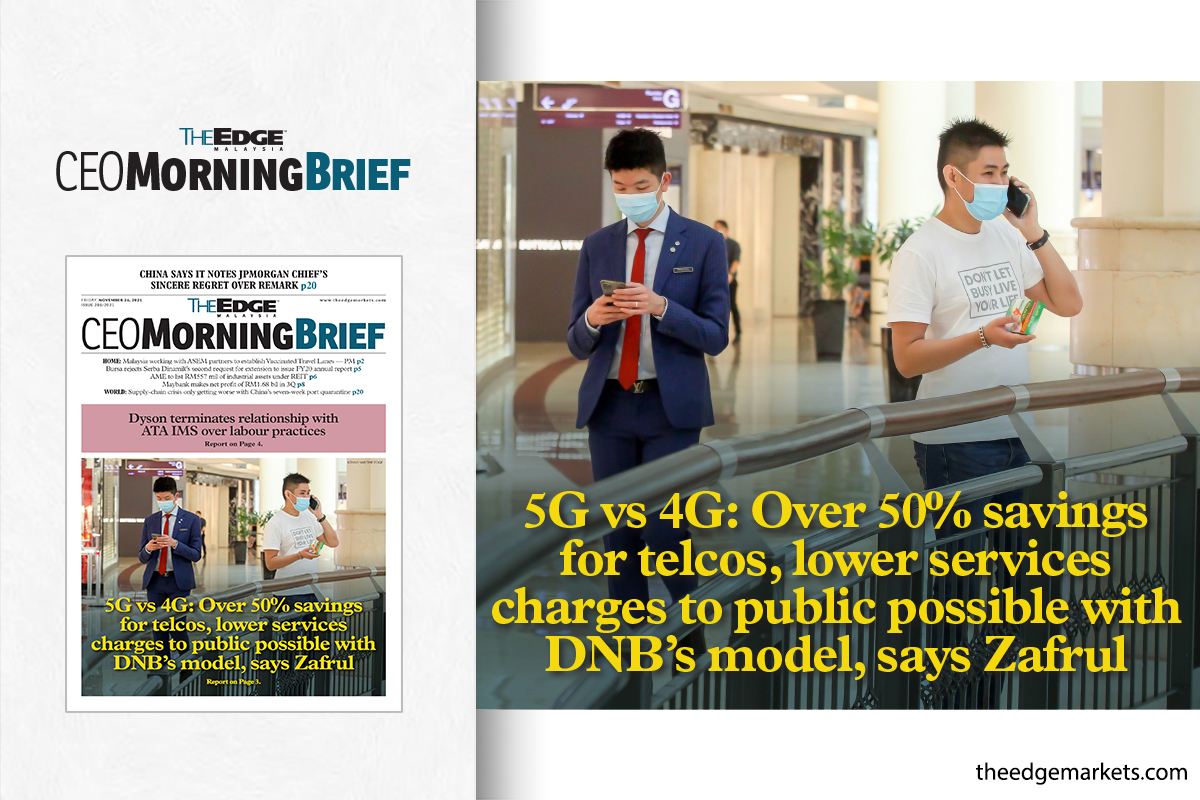 Speaking in the Dewan Rakyat on Thursday, Zafrul said this is "way cheaper" compared with current incremental cost of 45 sen to 55 sen for every 4G gigabit produced by telcos.

He added that the charges paid by telcos to DNB for 5G leasing will be over 50% lower than the capital spent for 4G network currently.

Thus, Zafrul confirmed that this will result in more affordable 5G services for the people, relative to the cost of 4G services currently.

In the past, different 4G spectrums were awarded to different telcos, who will go on to develop their own infrastructure or lease from asset owners to support the spectrum they were awarded with.

For the 5G network, DNB will roll out the network through a single wholesale network, for which it will be the sole owner of the assets and will lease it out to telcos.

"Through this model, each telco is expected to pay DNB between RM3.5 billion and RM4 billion in the next 10 years, or an average of RM350 million to RM400 million a year.

"This is way lower than the RM1 billion capital spent for 4G network which is invested by telcos every year," Zafrul said.

"This means they will achieve savings of more than 50%, and that will reduce the service charges imposed on customers. At the same time they will be able to pay more dividends to their shareholders," he added.

Zafrul also said that with this structure, telcos will be able to provide 5G services much earlier than if they launch the network themselves.

"The parable is like using a single large highway for all vehicles, which will definitely require much lower cost for the drivers. This is compared to usage of multiple small highways, especially if even the first highway has not reached its full capacity utilisation," Zafrul said.

"From the financial implication perspective, telcos may prioritise 5G roll-out that is not open to all mobile virtual network operators. This is because telcos could retain their positions especially in ensuring their profit margins remain secured.

"On the flip side, the model used by DNB will encourage telcos to compete from the perspective of costs, products and services, as they have already achieved savings in terms of capital to establish the infrastructure — which is already provided by DNB," he added.

He pointed out that the cost for the 5G network roll-out "will not involve any guarantee or financing from the government, especially via off balance sheet as alleged by some parties".

It will be paid via a combination of deferred financing to vendors, trade financing and working capital, as well as sukuk which will be issued in the local capital market.

DNB will obtain the financing from financial institutions such as banks, which will be repaid via earnings from the wholesale network sale.

Zafrul was responding to questions from Lukanisman Awang Sauni (GPS-Sibuti) on concerns over pricing set by DNB as a monopoly to telcos.

The pricing to telcos by DNB is still being finalised, and pending approval from the Malaysian Communications and Multimedia Commission (MCMC).

"MCMC as the regulator, will ensure the pricing is fair and based on cost recovery, and not to generate profit," said Zafrul.

"I was informed that the pricing for 5G is almost finalised, and it is much different and way cheaper compared to the cost for every gigabit of 4G by telcos," he said.

"As such, I believe telcos will welcome the pricing when it is informed to them later," Zafrul said.