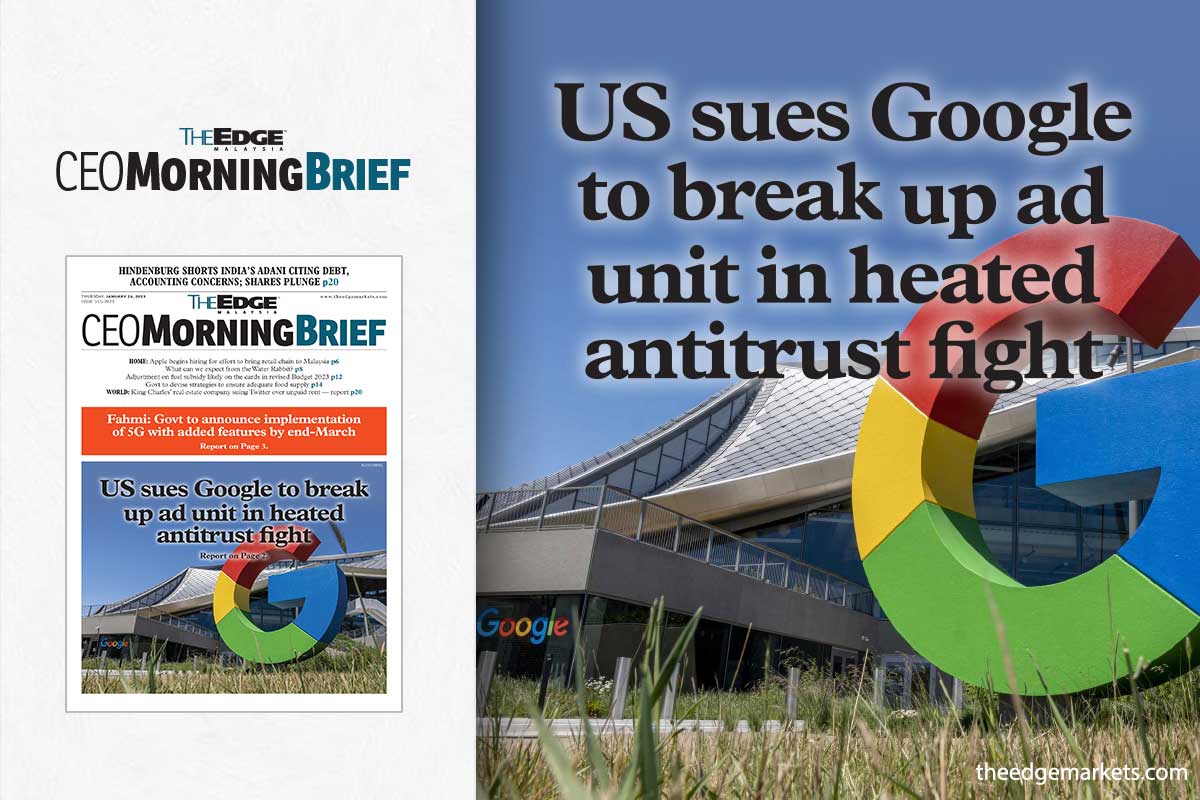 (Jan 25): The US Justice Department (DOJ) and eight states sued Alphabet Inc’s Google, calling for the break-up of the search giant’s ad-technology business, over alleged illegal monopolisation of the digital advertising market.

“The lawsuit we have filed today seeks to hold Google to account for what we allege are its long-standing monopolies in digital advertising technologies that content creators use to sell ads and advertisers use to buy ads on the open Internet,” said the DOJ’s antitrust chief Jonathan Kanter at a news conference on Tuesday (Jan 24) announcing the suit.

New York, California and Virginia were among the states that signed on to the complaint, which was filed in the Federal Court in Virginia.

Google said in a blog post that the lawsuit “attempts to pick winners and losers in the highly competitive advertising technology sector. The case “largely duplicates an unfounded lawsuit by the Texas attorney general, much of which was recently dismissed by a Federal Court. The DOJ is doubling down on a flawed argument that would slow innovation, raise advertising fees, and make it harder for thousands of small businesses and publishers to grow”.

Alphabet extended declines on the news, dropping as much as 2.6% to touch a session low. The stock slid 23% in the 12 months ended on Monday, underperforming the Nasdaq 100 Index.

“No matter the industry and no matter the company, the DOJ will vigorously enforce our antitrust laws,” Attorney General Merrick Garland said during the press conference.

The lawsuit represents the Biden administration’s first major case challenging the power of one of the nation’s largest tech companies, following through on a probe that began under former president Donald Trump. It also marks one of the few times the DOJ has called for the break-up of a major company since it dismantled the Bell telecommunications system in the 1980s.

Google is the dominant player in the US$278.6 billion (RM1.19 trillion) US digital-ad market, controlling most of the technology used to buy, sell and serve online advertising. The DOJ said Google’s dominance allows it to keep at least US$0.30 out of every dollar advertisers spend through its online advertising tools. A resolution in the case could be years away.

“Google’s pervasive power over the entire ad tech industry has been questioned by its own digital advertising executives,” according to the complaint. “The analogy would be if Goldman or Citibank owned the NYSE (New York Stock Exchange).”

The lawsuit marks the DOJ’s second antitrust suit against Google, and the fifth major case in the US challenging the company’s business practices. State attorneys general have filed three separate suits against Google, alleging that it dominates the markets for online search, advertising technology and apps on the Android mobile platform in violation of antitrust laws.

DOJ antitrust chief Kanter said during the news conference that Google engaged in 15 years of anticompetitive conduct, including a “pattern of acquisitions to obtain market dominance”.

Those include the 2007 acquisition of online advertising giant DoubleClick for US$3.1 billion, which the DOJ is now seeking to unwind, the 2010 deal to buy Invite Media for US$81 million, and the 2011 purchase of AdMeld for US$400 million.

The DOJ’s complaint also seeks damages from Google for allegedly overcharging federal government agencies, such as the US Army, that purchased online ads. The agency said the US government had spent more than US$100 million on online display advertising since 2019, but the complaint didn’t indicate how much the DOJ is seeking to recoup. The allegations in the DOJ’s suit mirror those brought by attorneys general in 16 states plus Puerto Rico in 2020. That lawsuit is pending in the New York Federal Court.

The Mountain View, California-based company is No 1 in the US$626.9 billion global digital ad market, according to 2023 estimates by research firm EMarketer, with the US representing the biggest piece. Alphabet’s ad operations are expected to bring in US$73.8 billion in US digital ad revenue in 2023. Most of that, US$58.50 billion, comes from Google’s search advertising business. The remaining US$15.29 billion is from display ads. Google runs an ad-buying service for marketers and an ad-selling one for publishers, as well as a trading exchange, where both sides complete transactions in lightning-fast auctions.

These exchanges operate like online stock-trading platforms with an automated bidding process. Competitors and publishers have complained that Google leverages parts of this vast network, like its ad exchange, to benefit other areas and knee-cap rivals. Google alone is expected to generate some US$65.7 billion in digital ad revenue in the US this year, representing about 26.5% of the market, while YouTube represents another 2.9%, according to EMarketer.

The company’s market share has slipped from a high of 37.4% of US digital ad spending in 2015, according to EMarketer. Google argues that the market for online advertising is a crowded and competitive one. In court filings and congressional testimony, the company has noted its rivals include other major players in the ad tech market such as Amazon.com Inc, Meta Platforms Inc and Microsoft Corp.

The DOJ’s scrutiny of Google’s control of the ad tech market goes back to the Trump administration. The DOJ under then attorney general William Barr sued Google over its search business instead, alleging the company used exclusive distribution deals with wireless carriers and phone makers to lock out competition. That case is due to go to trial in September.

The agency continued the probe into advertising technology under Biden. After Kanter was confirmed to lead the antitrust division in November 2021, Google asked the DOJ to review whether Kanter should be recused from all actions involving the company because of his past work representing its critics. Kanter was barred from working on Google’s monopoly investigations, while the DOJ deliberated on his potential recusal. The DOJ ultimately ruled that Kanter can work on cases related to Google.

The case is US v Google, 23-cv-108,  US District Court, Eastern District of Virginia (Alexandria).